In Toulouse, not far from Beluzer

making a deep pit a palace of spectacle,

the treasure found will come to vex everyone

in two places and near the Basacle.

(transcribed) He -Nostradamus- speaking to a hypnotized subject in our time says this quatrain refers to events that will happen during the time of an anti-christ, such as Hitler.  The great pit will be caused by the accidental detonation of some buried weapons or concealed weapons. The event will cause the people in charge to be ridiculed. The palace of spectacle is an analogy to their positions no longer being held in respect. They are a source of ridicule for they made a very poor decision in bad judgment. Some information will come to light concerning some corruption in high places; this will cause consternation, not only in France but in another nation as well, for it will be information concerning some diplomatic goings-on. The information is symbolized by the treasure found. This will come to light at a bad time and will alarm the parties involved.

He says Beluzer was a village in his time, a rather rural spot. The weapons involved would be concealed in a rural area where there would be less chances of someone discovering them.

(Hypnotist:) Did he give the name of a rural village to symbolize the weapons being buried in a rural location?

A: No, it's not a symbol. It's the location. Near Beluzer and Toulouse. The name Beluzer will have changed through the centuries or perhaps most of the people will have moved away so it might not be called a village. 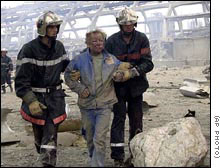 Sept 21, 2001 TOULOUSE, France -- A massive explosion at a petrochemical plant near the southern French city of Toulouse has claimed the lives of 17 people

I suppose if there is further news that there were weapons at the plant (rather then agricultural chemicals) or corruption in high places is uncovered in association with it I would be more inclined to think that the quatrain applies to this event. Just one more world event I will "keep my eye on." ;) to try and put the puzzle together.